A picture is worth a thousand words, right? Well, here: 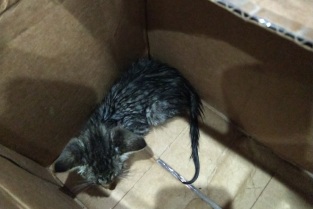 Wednesday the 13th I got a frantic call from the front office of my apartment complex.

“We found a kitten and we can’t get ahold of any local rescues and do you know what do to?”

The reason they thought to call me was because I have been regularly irritating management about their refusal to let me foster more than two kittens at a time. Kevin and I were talking about hooking up with a local rescue and going official rather than falling into fostering strays like we do. But if we’re going to take in litters, especially during kitten season, we can’t stick to a maximum of two.

The office may not agree to let me foster litters, but boy do they apparently remember me.

Life lesson: Be obnoxious. It could save a life.

So we get downstairs and they take us to the dumpster, where maintenance found the kitten and stuck him in a box. He reeked. Even if they hadn’t told me they found him in the dumpster, it would have been easy to tell. He was soaking wet and smelled of the garbage juice he’d been marinating in. I could see fleas.

I walked him the half a mile to the nearest vet and they immediately whisked him into the back. The vet was extremely not optimistic.

The first day was pretty stressful. He stayed at the vet during their open hours. When we went to pick him up at five, we were told that it didn’t look good. They’d killed the fleas and given him a dewormer for the hook- and round- worms, but he wasn’t able to regulate his own body temperature. He was at 92 degrees, and normally a cat should be 100 or 101. He had a wicked eye infection (that we’re still treating. It’s why he’s squinting in most of the pictures.) He was so emaciated you could see his ribs and he was so dehydrated…I can’t think of a good way to explain it, but trust me. It was bad. Our job was to take his temperature every hour throughout the night and keep his hot water bottle warm.

During the eleven o’clock temperature taking, he started bleeding, so we hustled him over to a twenty-four hour vet. That vet told us to forget the temperature taking and instead force feed him a special recovery formula. I think this is what really saved the kitten’s life.

In the morning we took him back to the day vet, who was very impressed we’d kept him alive through the night. They hadn’t expected him to survive.

So we began what I called the day care routine. The kitten, named Squeaker because of the one noise he knew how to make, would spend 8-5 every day at the vet, getting subcutaneous fluids and medication for his various infections. Then he’d come home with us for hourly force feeding, where we’d measure how much formula we got out of the syringe and divide that by half to figure what we’d actually gotten into him. We’d reheat the water bottle, give him his medications, and do it again in an hour.

Over the weekend he came home with us full-time. It was terrifying. We had to give him subcutaneous fluids once of twice a day. (Kevin did the needle parts while I held Squeaker still so he didn’t hurt himself. It was an unpleasant experience for everyone.) We got to decrease feedings to every two hours, which was amazing because we were trashed without sleep.

Monday we bring him in for a check up, to make sure we were on the right track, and the vet said that he was impressed. He’d privately given Squeaker a 25% chance of making it through that first night and here he was. He was even well enough for a bath, which was the best day ever. (Because he couldn’t keep his body temperature up on is own before then, he couldn’t have a bath. Too dangerous.) I got to bring him home to Kevin smelling like fruit. We also decreased check-in times to every four hours.

Thursday we got to stop with the subcutaneous fluids. He was getting enough water through the wet kitten food he was now eating unaided.

Now he’s a pretty normal kitten. He’s slowly starting to learn that it’s okay to explore. His favorite thing in the world is sleep, followed by food, although my Pygmy Puff slippers are starting to close the gap. (No one knows why. Maybe he thinks they’re other kittens?) 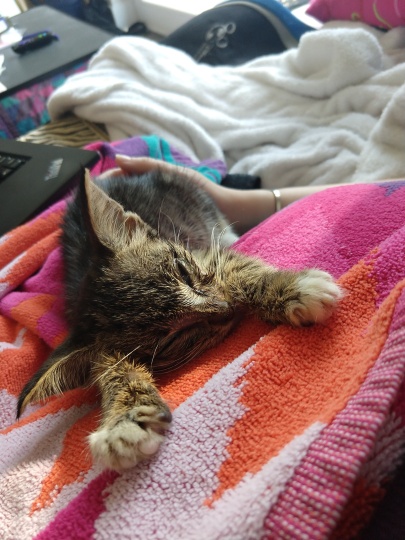 He’s estimated to be about six weeks old, so in another two to three weeks we’ll get him fixed and work on finding him a forever home. (If you’re in the Orlando area and in the market for a kitten who likes to sleep in laps, let me know! Squeaker is looking for a family like you.)

It’s wild to see how far he’s come in the last week and a half. Getting up every hour, terrified that this time I’m going to find out he stopped breathing, feels like it was another life entirely. Now he squeaks when he wants to be picked up or wants more food. He’s taking cautious half-circle walks around the outside of his pen, just to see if he can. We’ve come such a long way from having to create a pen with a towel and cardboard boxes because we weren’t prepared for a critically ill kitten.

So now I’m getting back to work while Squeaker takes a nap on his hot water bottle by my side (he loves that water bottle). It was a major disruption to regular life, but not one I could regret, even for a second. After all, how often do you get to say that you saved a life?

Anyone else have experience fostering? Or want to show me pictures of your fur babies? I’d love to see them!

One thought on “Why Life Went Wahooney-Shaped”

Just a reminder that it's time for our weekly virtual write in!
I've put together the complete list of dates for the Orlando Zine Meetup! They're safely stashed in the Zine Meetup highlight on my profile.
I remembered to get at least one picture at #orlandozinemeetup this month!
I always forget about #orlandocriticalmass until it's too late, but man do those lights brighten up the evening.
Feel free to bring your own supplies, or just hang out!
Just to commemorate this winter in Orlando.

Find Me Here, Too!