This weekend Kevin and I went into Annapolis and wandered around.  We went to Lolli & Pops (a real-life Honeydukes) and I picked up this intriguing box from the Japanese section: 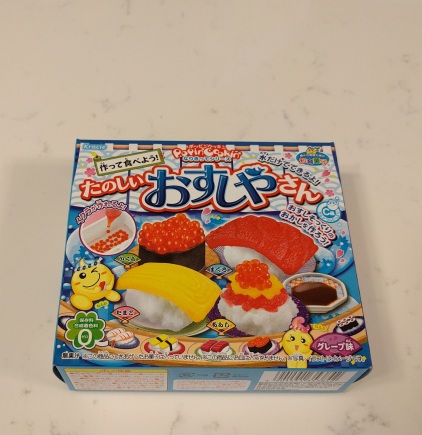 I love food that looks like other food.  Those “trick” cupcakes that look like mashed potatoes and chicken?  My favs.  I expected this to be a gummi bento box, but it was so, so much more.

When I opened the box back in our hotel room, there was a plastic tray with a little squeeze bottle, a tiny shovel, and packets of powder.  Needless to say, I was a bit baffled.  And since neither Kevin nor I read Japanese, I didn’t think we’d ever figure it out.  But Kevin puzzled out the pictures in the instructions on the back and we soldiered on.

Basically, you mix the different powders with water in the different sections of the tray to achieve different effects.  Then you assemble the things you created.

The first step was to make the ‘rice.’  This was when I knew this was going to be a really fun project, because the rice smelled strongly like bubblegum and took on the texture of that fake snow-in-a-can stuff.  But edible!  (Although at this point my belief that it was going to be edible hinged solely on the fact that I bought it in a candy store.  It really did have the texture of fake snow.)

This was the part that made Kevin stop and go “WOW.”  I have about half a dozen pictures of this part of the process because we were both so enamored.  For those red and yellow strips I just had to mix the powders into water and then spread them out a bit so they were more or less level.  This orange one though?  That was something else.  First you mix the blue packet with water in one pocket.  It didn’t do anything, which was weird.  Then you mix the orange packet with water in the neighboring pocket.  It made orange water.  But THEN you do the magic bit.

You take the dropper, fill it with orange liquid, and drip it one drop at a time into the blue liquid.  And it just turns into little balls!  And they don’t meld back together!  I filled the entire blue tray with little orange balls.  It was the coolest thing.  Kevin, who regularly eats caviar, was super impressed with the texture of the little ‘roe’ balls.  According to him, they were surprisingly similar, if slightly different in flavor.

This is the end result of the process.  That middle one doesn’t look quite like it’s supposed to (judging from the picture on the box), but I’m still crazy impressed with how everything turned out.  That ‘nori’ wrapped one in the back?  The ‘nori’ comes as a little brick and you stretch it out to fit a pattern on the plastic, then wrap it around some of the ‘rice’ and top with the ‘roe.’  Seriously y’all, this is the coolest candy I have ever made.

Kevin and I split the first piece and then he begged off.  The rice, which really did taste like bubblegum but dissolved like normal candy, threw him off (I think).

The last thing I made was grape ‘soy sauce’ for dipping the sushi into, if I wanted.

I don’t think I can do the experience justice, you really have to do it yourself.

Just a reminder that it's time for our weekly virtual write in!
I've put together the complete list of dates for the Orlando Zine Meetup! They're safely stashed in the Zine Meetup highlight on my profile.
I remembered to get at least one picture at #orlandozinemeetup this month!
I always forget about #orlandocriticalmass until it's too late, but man do those lights brighten up the evening.
Feel free to bring your own supplies, or just hang out!
Just to commemorate this winter in Orlando.

Find Me Here, Too!